I grew up in Gresham where I first met Jesus and now I'm on mission with him at Rise with my wife Lindsey and two little rascals Ollie and Remy. 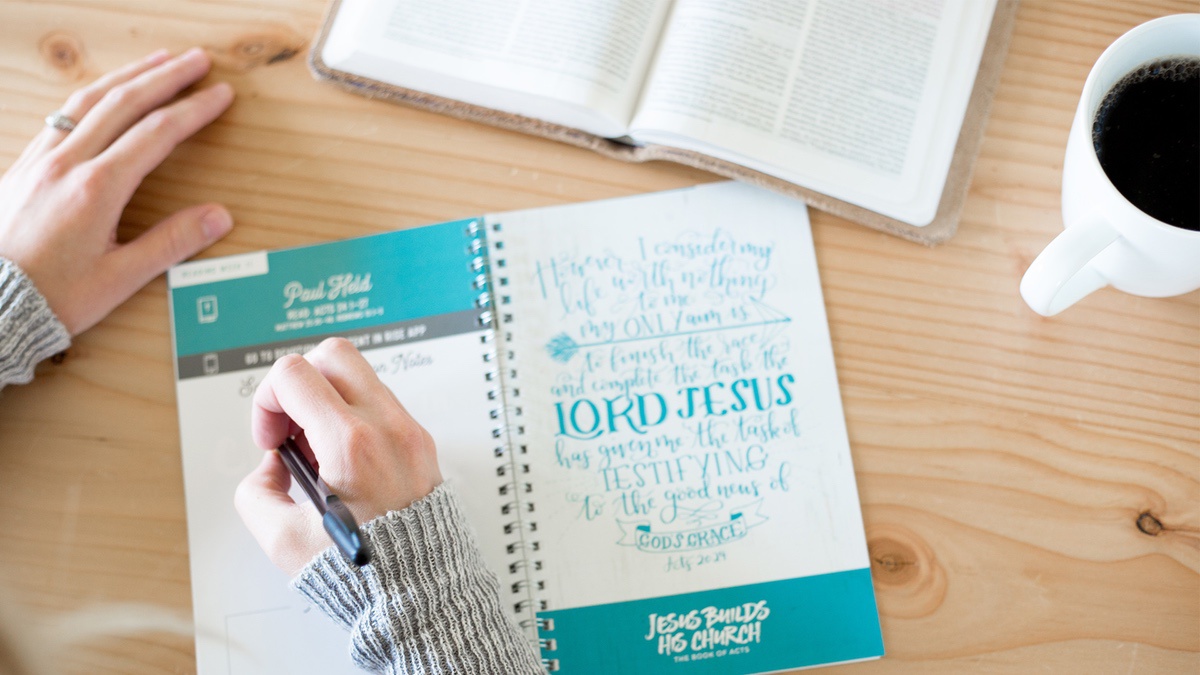 We get bored of the same. That’s why apps  that constantly change and progress (think Instagram or your favorite news feed) attract your attention. We were made for the pursuit of more. And God is not incapable of satisfying our interest and longing for that more.

The Gospel on Social Media

There’s no verse in the bible saying thou shall not tweet. There’s no commandment authorizing selfy-stories. It doesn’t say, "for God so loved Facebook that he gave a few likes." We don’t get some black-and-white verse. Instead we’re given from scripture something much more complex, colorful, and helpful than that for our everyday lives. . .

4 Ways to Beef Up Your Invite | Rise Youth

How to Share Your Faith Without Losing Your Friends

If you follow Jesus, the question isn't, "should I share my faith?" Every day that you walk through your school you're walking among the spiritually dead. In fact you are not there on accident. You are sent there by God to be the only hope in the spiritual cemetery.

Overworked, depressed, and alone, I made the call for us to move back to Portland. But all wasn't well. We may have left the sadness of Sacramento, but the sadness never left me. On the drive up, I watched a dream slip away in the rearview mirror. There's something about the death of a dream that changes you. Didn't God call me? Back home, friends and acquaintances would comment on how di erent I was. They were right. I was di erent. A burned wick remained inside of me where the bright light once burned. I felt sidelined from God's plan. Have you ever felt sidelined from God's plan? In what part of your life?

You're Longing to Be Baptized

I recently had my mind blown talking to a friend who left gang-life upon encountering the Gospel.

He said the most profound thing.

He told me how much baptism made sense after growing up in gang culture. Because, in a gang you’re initiated through a crime or fighting. It’s a mark of your permanent inclusion into the family. He said he noticed in the Church you’re initiated too. You’re initiated by being immersed, not in evil, but in the renewing waters of baptism. He realized the Church is the better fulfillment of what the human heart longs for in a gang.

As my friend spoke I realized how important baptism is...

The Hardest Week of My Life

In 2006 I went to Mexico. I went on this week-long mission trip with 20 or 30 other students. We spent money, got in a van, drove for hours, and sweated our brains out doing tireless labor building a church. And it was real work. My hands were a calloused, bloody mess, mixed with dried stucko all week long. I couldn’t sleep in the heat, on the cot, with the bugs. But I’ve never felt more spiritually “full” than during that week.

Not Your Father's Call to Baptism

Too often people downplay Baptism as though it's just some religious-y ritual that functionally means nothing. But hold on. . .The act of being baptized is not identifying with some abstract, meaningless, religious idea. No. It's embodying your connection to the King of Reality. Something holy--something other happens at your baptism.

This is a great opportunity for you to connect with your kids over the scriptures!

Each week we've provided you with questions about the week's topic on these questions to prompt conversation with your student(s) in the car or after youth group on another day. We know that the primary place of discipleship is at home so we're sending these questions to equip you to engage your teen about Jesus.

Did God Cause The Corona Virus?

This question haunts many of us. If there’s an all-powerful God, couldn’t He have prevented this? If there’s a sovereign God, why would he allow this through His sovereign will? And maybe even more pointedly, did God cause this? I want to offer three imprtant reflections from biblical theology.

This morning I was looking at the news and saw that the White House will be extending the the coronavirus guidelines until April 30th. I’m going to be honest, even though I knew that was coming, I was still pretty discouraged by that thought.

These days feel dark. This is but one of many difficulties within this pandemic. People are losing lot. From their sense of normal, to their jobs, to retirement, and even loved ones.

I was on our church’s prayer channel Friday morning as prayer requests came pouring in.

THREE Ways to Survive Your Quaranteenager!

We Can't Go Back to the Way Things Were

There’s a light at the end of the tunnel. The cases from this pandemic are starting to taper off in some the most intense regions it hit. One example is New York. That doesn’t mean this is over, but it does stir up the question: what happens after this?

Will things go back to being the same?

We look forward to life as it was. However, I want you to consider that there are some things that shouldn’t go back to normal.

Have you ever had a conversation with your teenager and found it less than engaging?

As a youth pastor, I feel like one of the biggest hurdles in ministry for my team is figuring out of to get students to open up. Making matters worse, if you’re like me, the tendency is to talk at people rather than to engage with them. Are there practical techniques for helping people open up?

This weekend I powered through an audiobook that was really helpful. It’s The Coaching Habit by Michael Stanier. I love the subtitle: Say Less, Ask More and Change the Way You Lead.

In this book he offers seven questions that are key to helping cultivate dialogue. I want to offer three of them in somewhat re-vamped forms for the context of discipling teenagers.

I can still remember when it hit me: I was free.

My cap was flying in the air, and what came down was the sense that the rest of my life was up to me.

Whether I walked with integrity,

whether I worked hard,

whether I was a faithful friend,

whether I lived an honorable life,

…and whether I followed Jesus

was all up to me.

Yet, the only thing that would determine what decisions I wouild make moving forward was the discipleship I received up to that point.

The psalmist of Psalm 127 poetically describes children as arrows. And like real arrows we must allow certain key anchor points or values guide our leadership toward the goal: to send of fully devoted disciples of Jesus.

I mentioned having principles that govern my parenting and leadership in the student ministry. These are the key cultural markers I want to drive into my kids and students before they fly off. I’m going to talk through the first today:

D.L. Moody once heard Henry Varly, a preacher in his day say: “The world has yet to see what God can do with a man fully consecrated to him.” And his response was: "By God’s help, I aim to be that man.”

Moody then poured his life and work into that calling.

This is the kind of vision we need to give our kids! What would your life look like if you threw everything at Jesus? What if you were a young man or woman who was fully committed to His work and His will for your life?

As a teenager, I distinctly recall having a curiosity about God and an interest in the Christian God in particular. But there was this one thing that really deterred me from the Church. It was kid in my freshman computer class. He was loud, obnoxious, immature, disrespectful, distracted, annoying, and outspokenly Christian. He wore bad Christian tee-shirts, never cussed, and talked incessantly over the teacher. It was a class with assigned seating and as a non-Christian teenager obsessed with achieving a high GPA one of the closest ways I ever got to prayer was asking the universe not to sit me next to him. But guess who I got seated by?

Week one we explored the idea of bible culture. So how is this different? I would argue it’s extremely different and a highly important distinction.

Why Should I Read The Bible?

Many of us would say that reading the Bible is hard. It’s hard to understand. It’s hard to stay consistent. So, why not just give up? Here’s the big idea today: It’s worth it. What the Bible offers you as worth wanting badly enough that you’ll give your life to studying it. Here’s THREE reasons you should be devoted to the Word of God.

Why Should I Even Church?

At 16 years old I went from disbelieving in God to Baptizing every dude I knew. Pretty quickly we started a make-shift bible Study on the ground at a gas stations by Gresham High School at lunch time. After school we would drive kids to youth group, packing them well beyond capacity in my dads astro-van illegally. I should have been arrested.

Why were we living this way?

As former non-christian dudes we discovered the secret being kept from us was the beauty of the local Church.

Which part of the book of Revelation are we in today? It’s the question we’re all thinking when we wake up. It seems like we hit a new dimension of a not only a pandemic but a cultural crisis daily.

How do we face the current trials, battles and landmines? We need guidance more than ever. Here’s how to survive the Apocalypse in three simple-but-not-easy-steps.

How To Talk To Teens About Politics

HOW TO TALK TO YOUR TEENS ABOUT POLITICS

It feels like overnight our culture has gone from considering politics a somewhat taboo topic to becoming the only topic people are talking about. Social media, the News and even ESPN are ablaze with protests, racial tension, anger, violence, and political unrest.

I even rolled up to a gas station the other day and saw people fighting about what seemed to be politics.

If you’re not having conversations about this subject with your kids already you’re probably thinking about how to approach it. Maybe you’ve tried to talk with your son or daughters about it and it’s resulted in conflict. How do we navigate these issues with teenagers?

It feels like overnight our culture has gone from considering politics a somewhat taboo topic to becoming the only topic people are talking about.

Social media, the News and even ESPN are ablaze with protests, racial tension, anger, violence, and political unrest. I rolled up to a gas station the other day and saw people fighting about what seemed to be politics. It's everywhere.

How should we approach these issues as Christians? What are some things to think about as we process what's unfolding?

Is Youth Group Worth The Risk?

The other day I listened to a podcast by a very famous pastor who assured his church that there would be no services of any kind except online until 2021. Social distance is the new rule of the day. Because we are in a pandemic I understand that. Safety is so important.

However, while that’s true, I’ve begun asking the question: what if, in some ways, we are being taught to value safety and health above our need for community, discipleship, and connection with God and others?

Fill out my online form.